A Year in Reflection - 100 Years of Hayling Island Sailing Club

Hayling Island Sailing Club reached a substantial milestone in its history last year marking 100 years of sailing history. The club put on an incredible array of events both on and off the water throughout 2021 to celebrate reaching this historic landmark.

"We have come a long way since 1921 when the club was formed with just seven sailors. The first regatta ran with a small number of local regularly sailed boats and a hundred years later we now have 3500+ members and over 150 boats at our regattas. Reaching our 100-year milestone is very special and we have celebrated it in style!" Andy Partington – Commodore

A huge highlight of the centenary year was the Royal Visit from HRH The Princess Royal. The flags were on display, the Centenary book and commemorative scarf were presented as gifts, the Centenary artwork was unveiled and despite the challenges, the sun shone and the day was fantastic. Even the challenging anchor winch on our committee boat (with the Princess onboard) didn’t faze the Commodore. 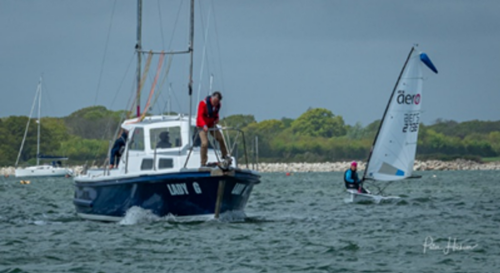 To mark the centenary a long-standing member, Adrienne Aitken, designed a print called “Regatta Day” which became the Centenary artwork. This original work now hangs in the clubhouse.

“My artwork was used as the graphic for our centenary memorabilia which includes silk scarves, handkerchiefs and a limited run of signed prints” Adrienne Aitkin
Other centenary memorabilia, which are still available to purchase, include polo shirts/sweatshirts, hats, whiskey glasses and The Centenary Book. In order to facilitate such an endeavour regular workshops run by Carol Carter and Xan Carr started in early 2017. The HISC Archive Team provided subjects and events to be depicted for each year from 1921 to 2021 and every effort was made to ensure historic accuracy. In total eighty-eight members took up the challenge and made 101 flags between them. A wide variety of techniques were used including appliqué, embroidery, needlepoint, silk, oil and acrylic painting, marquetry and even metal work and felting. Despite the challenges of the pandemic, the flags were all finished and hung in the dining room at the start of the celebrations. This amazing display shows the wonderful creative and imaginative talents of members and will become a unique part of HISC’s archives for the years to come.

HISC also boasts some literary mastermind amongst its members too, as to further compliment the celebrations a new book has been written entitled ‘100 Years in the Making’, by authors Belinda Cook and Léonie Austin, who kindly signed books at the Centenary Tea and were delighted to be invited to cut the Centenary Cake at the Centenary Prize Giving. The book was designed by Paul Fisk.

“This colourful and informative photographic coffee table book tells the story from the beginning in 1921. Many aspects of the varied activities of HISC have been highlighted, including social events, racing and cruising of dinghies, cruisers, windsurfers and SUPs. Members say that they are really enjoying the book, along with searching for themselves and family amongst the photographs. This book will be referred to and treasured for its historic timeline, still so relevant today, for many years to come.” Belinda Cook and Leonie Austin

A big birthday needs a big celebration and that is exactly what took place on our centenary weekend of celebrations, a huge fireworks display was created in support of the RNLI where over £1200 was raised for the local lifeboat station on Hayling Island. On the opening ceremony night a hamper was raffled and the first prize was to set off the fireworks to launch the weekend. This was Hilary Baker who was thrilled to receive such an honour.

As the first regatta back in 1922 ever held at HISC included a series of games and events, in addition to the racing. Simon Hooper, our beach master, used a programme from the first regatta in 1922 to recreate some of these, with a modern twist. Instead of the greasy pole we used a SUP for the competitors to knock each other off with very soggy pillows. There were some more traditional elements like the egg & spoon race and swimming race too. The beach was full of excited families taking part in the games which were won by Andre Ozanne and his team. 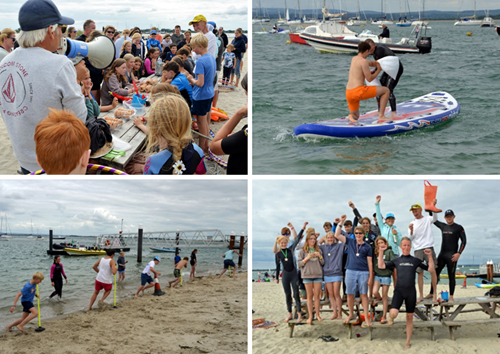 The gala dinner was certainly a night to remember.  Many of our House Team had been pinged by NHS track and trace and were isolating.  A spur of the moment request from Vice Commodore House, Emma Toman, saw our members leap in to save the day, not only serving the delicious food but also clearing the plates at the end of each course.  There was a great team spirit and this left a lasting effect and good feeling with everyone who attended. 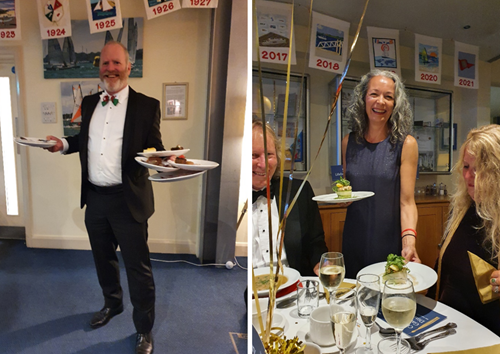 In order to be inclusive for every member, HISC held a disco outside at the same time as the Gala Dinner was held inside.  This attracted younger members and families who had spent the day playing games on the beach.  Our superstar DJ, Mark Covell, set up on the balcony and played to the audience who danced the night away, his laser light show over the dinghies added to the superb party atmosphere. 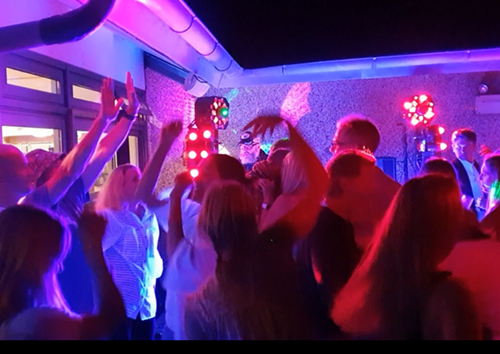 The sailing celebrations to mark the 100-year anniversary of Hayling Island Sailing club culminated in the Centenary Race at the club on Sunday 29th August. Over 150 boats entered the Handicap race, rekindling many old family rivalries dating back to early days of the club, with three or more generations of the same families sailing together on a variety of different craft, the fleet including 20 cruisers and a wide range of dinghies, with many families and juniors taking part. Boats started simultaneously from four different lines, with each fleet sailing a course of a different length around a mix of inflatables and the fixed marks in Hayling Bay; 8 miles for the cruisers and slow handicap, 12 miles for the medium fleet and 16 miles for the fast boats. All fleets finished on the club line, and the results were amalgamated to produce a single winner of the event.

The brief for the race was to be memorable, and the sight of all the boats sharing Hayling Bay mid-race was particularly spectacular. PRO, Charlie Bradshaw, did a superb job in a range of wind conditions to ensure everyone had a good race. This led to a special Endeavour Award for Mike Partridge and Clare Davis who were last to complete the course, out of time but resolute, to record an elapsed time of 4 hrs 35 minutes.

The winners of each fleet won centenary glasses and a presentation pack from celebration sponsors Salcombe Gin.

The cruiser fleet was won by Guy McBride and his crew on Exeat a Storm 33; triumphant in the Fast fleet were Andy & Tom Partington in their International 14, and taking line honours for the race and topping the Slow fleet were Judith Massey and Graham Williamson in their Wayfarer.

The overall winner of the Centenary Race also won the Medium Fleet, where James and Alison Yearsley with Jonny and Sophie Costard sailed their RS Elite to beat all comers. There was an emotional moment when they were presented with the Centenary Trophy, which was commissioned for the event by John Rees and the Centenary Committee, from contributions made by a number of members and the Two Sues Quiz nights, which incorporates elements of a prize from the first club regatta in 1922 into a new mounting made of wood from the iconic Stone Pine Tree that has stood in the club grounds since HISC moved to the Black Point site, on which many generations of members have played as children. In true HISC tradition, we hosted an afternoon tea to wrap up the events of the weekend.  This very civilised affair was enjoyed ahead of the final prize giving.

Take a look at the Online Shop and the wonderful Centenary items we have on offer.