This week we saw the first Youth Commodores Trophy.  26 sailors took to the water in a battle to win this fabulous new event, with ages ranging from 8 to 15yrs.

The weather was fresh with a North Easterly averaging 15 knots and gusts in excess of 20 knots, with choppy water and a strong tide.  High water allowed us to lay a slalom course over West Mud but the clock was ticking, we had to get in six races plus a final, changing over children and boats in-between and all in three hours.

As well as having fun this was an opportunity to use the club Fevas and see how they performed, and what needed fixing. This led to some extremely interesting comments on the course . . . ”It feels like I’m racing a ferry” being my favourite!

Maybe they’ll appreciate all our boat bimbling now! The kids did give the Marine Department some excellent boat specific feedback which will be really helpful. 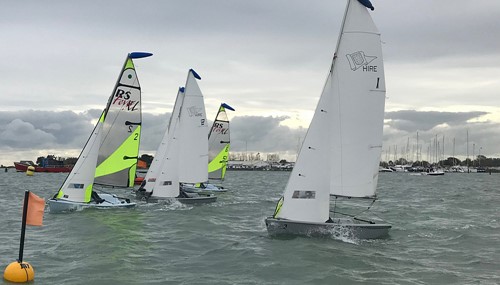 Each race they sailed against different people in different boats, six boats per race.

One leg saw a really tight reach with a few brave enough to try and use the spinnaker. The safe and steady boats chose to play safe without one . . . which often paid off.  The safety boats were kept busy and stayed warm recovering some of these more extreme sailors!

Three races later and six heats in the bag, we were able to select the top six boats for the grand final. It was all or nothing as none of the previous races counted. After some competitive maneuvering, we saw a clear start and a tight battle up to the windward mark. 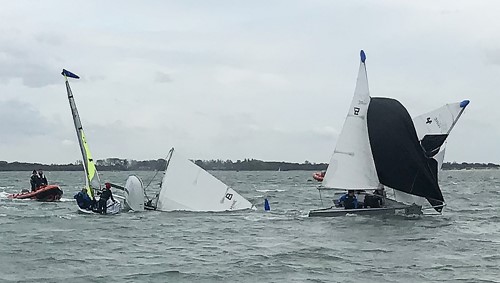 After the first lap there were three clear leaders and on the committee boats we settled in to write down the results. However on the final lap, with spinnakers flying, the exit out of the first gybe mark proved to be too tight and then carnage ensued, as the lead boat couldn’t hold it and despite great efforts went over, the second boat did the same as did the third.

Opportunity arose for those in pursuit, which they took full advantage of, and boy did they look happy to sail into the lead.

So with a clear leader with two marks to go we thought the excitement had finished but then the leading boat hit the next gybe mark and whilst doing their turns capsized. Two very excited young ladies stormed by and shot into the lead and excitedly finished first and squealed their way to victory and two rather nice trophies. 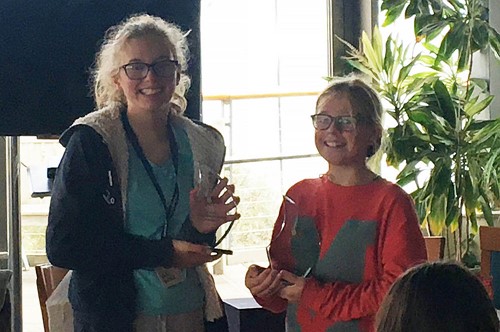 It was such a fabulous event and the kids had so much fun and there was some exceptional and exciting sailing to watch.

A massive well done to Holly Mitchell and Katy Fisher who won the first Youths Commodores Trophy, and to all the competitors and helpers that made it such a success!